turn on tune in drop out 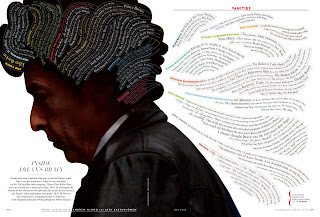 a friend and i were just having an email correspondence that started with his asking me to remind him not to become a junkie because he was standing next to a few junkies on houston street and thought they looked not in the best of shape. i proceeded to tell him not to turn into a junkie. he prodded, asking me, "isn't it tempting, though?" i told him yes, it was, and that i was actually hatching a plan to turn on, tune in and drop out. my plan involved moving into the death by audio space in brooklyn, taking a lot of drugs, making a lot of art, having a lot of sex, and forgetting about adulthood. we then LOL-ed because, if you knew me, you'd know how laughable that possibility is.

you see, i'm pretty tame; some might even substitute the L for a T in that adjective. still, i fantasize about escaping responsibilities and social mores as much as the next person, and I envy those who seem to have done so. I envy no one more in that regard than mr. bob dylan.

i'd hardly call dylan a junkie, but i'd say that he has probably seen a few things, that he has lived by his own code of conduct and that it wouldn't be far fetched to call him visionary. all of that makes me think that it would be nice to swim around his head for a day or two, something vanity fair thinks it can kinda, sorta do by analyzing his xm radio show, though i imagine they falsely assume that dylan selects everything he plays and speaks about, which is doubtful. still, it's a fun, fanciful exercise in exploration, and it can't be all that off; i doubt dylan would play or talk about anything he strongly disagreed with. click here to get INSIDE DYLAN'S BRAIN. 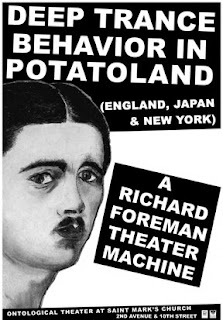 and if you're looking for another kind of psychedelic experience, go to st. marks church in the east village and see the ontological-hysteric theater/richard foreman production of DEEP TRANCE BEHAVIOR IN POTATOLAND, which wasn't entirely my cup of tea but which i still feel the richer for having seen. what made the experience (and it was an experience) extra special was the fact that richard foreman spent an hour doing q&a after the show, which he apparently does every tuesday night. the show and q&a session together was actually awesome and as a package deal, it's something i would definitely recommend to anyone who is interested in encountering something out of the everyday.
Posted by Alexis Stember at 4:58 PM