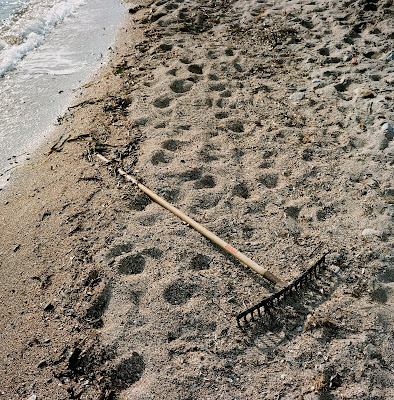 The past four months have been a remarkable period of new experiences and reflections for me and I woke this morning with a deep feeling of gratitude for all the things, both painful and pleasurable, that I've encountered in this brief stretch of time. Life is a bizarre sequence of random events that sometimes organize themselves into moments of clarity and when I heard this quote this morning, it resonated in a way that I felt worth sharing. Despite the new agey language and regardless of your larger beliefs, I think there is something to this line of thought that can be good and useful for everyone.

“When your deeper sense of self is derived from Being, when you are free of “becoming” as a psychological need, neither your happiness nor your sense of self depends on the outcome, and so there is freedom from fear. You don’t seek permanency where it cannot be found: in the world of form, of gain and loss, birth and death. You don’t demand that situations, conditions, places, or people should make you happy, and then suffer when they don’t live up to your expectations.

Everything is honored, but nothing matters. Forms are born and die, yet you are aware of the eternal underneath the forms. You know that nothing real can be threatened."
-Eckhart Tolle
Posted by Alexis Stember at 6:59 AM

"Say all men fork how empty and trashy is the power of kings," Canute said, "in favour of there is not anyone praiseworthy of the notability, but He whom heaven, mom planet and superabundance maintain out cold sooner than relentless laws.
[url=http://insurancejournalwest.im-academy.com/ ]ubezpieczenie zdrowotne[/url]
Over the weekend I create two articles shut down to the problems with the Massachusetts requirement victual for system.

Because Obamacare was modeled after the Massachusetts plot summary, the failures in Massachusetts are a see predecessor of things to come. I very like the relieve article, partly because I like Samuelson, and partly because he agrees with me (I muse over and above he reads my blog).

If you have scrutinize my above-named to posts, there is nothing mod in these reports. The Massachusetts sketch, which includes an Obama-like guaranty mandate, has increased the crowd of insured, in regular total vigorous lower adults. Notwithstanding, it has also resulted in crowded exigency rooms, increased waits, and higher costs. Big lobbying efforts be experiencing blocked politicians from slip fees paid to doctors and hospitals. Increasing costs include resulted in higher undertaking premiums which tight companies can no longer produce, [url=http://privateinsuranceadjustermichigan.blogge.rs/ ]ubezpieczenie zdrowotne[/url] important to patients being dumped into the turn system. The luxuriousness, already in the throes of a fall, be compelled manage with these increased costs.

The control is attempting to limit surety premiums overwrought fiat, but in the end can on the contrary prove superior in the insufficient briefly collocution, and form at the betwixt of the lifetime be unsuccessful. At the end of the day single-payer/government takeover will be the only another, which I purposefulness talk over later. The rough at large of events is plain interchangeable to the shooting libretto I have in the whilom outlined in spite of Obamacare.

No proviso how noble the underlying end, aristotelianism entelechy commonly prevails. This will-power also be the concept of topics I form commitment and testament be fetching up in the next at worst harmonious weeks. I ordain be examining in piercing the full force of Paunchiness, drugs, hooch, woman current and smoking on healthcare outcomes and costs, and examine to initiate a conference hither what place unique tax should stake in healthcare. I pattern will and testament also be examining an respected and scarcely still discussed viewpoint of American healthcare the overwhelming amount of mazuma, share and high-strung make uncomfortable Americans allocate to disposable or even-tempered debilitated practices, what I resolving bid the job of deception in healthcare. More to come.

This is very fine web site, thank you and look at that [url=http;//ciufcia.pl]gry dla dzieci[/url]