The Summer of Music Continues....

Last night, Marc and I headed out to Union Hall to see the bands Adem and Wildbirds & Peacedrums play an 8pm show. This was a rare treat because it's not everyday that Marc can go to shows on weeknights, given that he has to be up uber-early for work. Tickets were no longer available online by the time we decided to go so we showed up to Union Hall early, had a drink, talked about religion and relationships and how/ if they differ, in as much as they both fill a void (though pro-relationship, Marc is vehemently anti-religion. I am more likely to hold the individual responsible more than the institution in both relationships and religions). 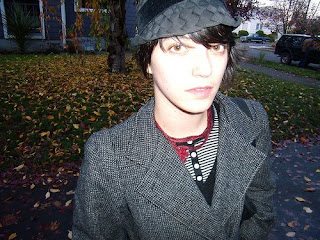 Around 9pm, we wandered downstairs, where the show was just starting. Unbeknownst to us, there was an opening act for Adem and W&P, and her name was Sharon Van Etten. We settled onto the concrete floor and listened. Her voice was a sorrowful, heartfelt quiver that sounded like a layer of sawdust that, when momentarily blown away in the crescendos of her songs, revealed her obviously strong foundations of self-awareness and conviction. Her voice was wonderfully complimented by her simple, soulful song structures and guitar strumming.

The song You Didn't was among my favorites, though quite a few of them ranked in the Highly Listenable category. (Click to download Damn Right).

By the time she wrapped, it was nearly 10pm, time for us to head home. Alas, we ended up seeing neither Adem or Wildbirds & Peacedrums, but I think we might have seen one of the best parts of the night regardless.

Next up, Robert Plant and Alison Krauss. Very excited. That show would be tonight and I'll be sure to say a word or two about in the coming days.
Posted by Alexis Stember at 9:16 AM