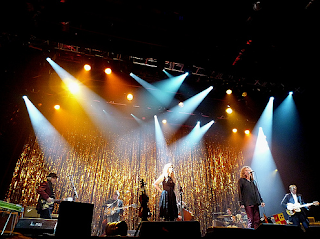 I'm so happy today, I don't know where to begin. I guess I'll start by mentioning the source of my current blissful state. Aside from the weather, which is truly momentous, and my friends, who are even more exceptional, aside from all of that, I am encountering the effects of the Robert Plant and Alison Krauss pill I took last night, a pill that is fast acting but administered through a time release capsule that keeps on giving, long after the show has ended. 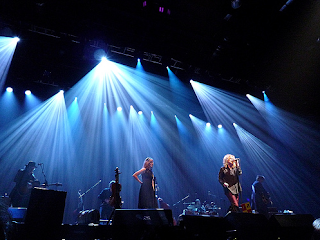 Watching the final night of the New York leg of the Rising Sand tour, I was struck by what I perceived as something- a quality, a feeling, I didn't know what- something in the aural-visual experience of what was in front of me that struck me as unique comparative to the other shows I've seen over the years. It only took me a moment to realize what it was; it was an awe and comfort in knowing on a visceral level that I was watching people who didn't just perform music but actually lived and breathed it, not because they loved it but because it was the only way they knew how to operate. It was like watching an isolated world of perfection (particularly the acappella rendition of Down in the River to Pray) in an impossibly imperfect world, and it left me feeling momentarily released from my corporeal reality. I think it's rare moments like these that are the reason music and art exist, and holy (insert the name of something holy), am I grateful for them. 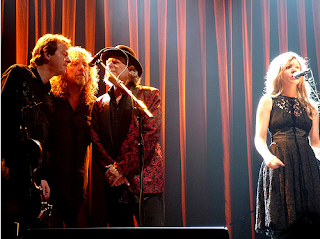 Music is an unquestionable passion of mine and though I've never considered it as a career for myself, I would go mental if I didn't get to play or sing with friends and family. In a happy twist of fate, I recently and serendipitously fell in with a group of musician friends who were looking for a singer. I tried out for them and they liked what they heard so we have started recording a couple tracks to see if the chemistry continues. If all goes well, I'll hopefully be able to blog about our own gigs and an upcoming album (everything is pretty much lined up- they've just been looking for the right vocalist), and soon be posting "Gone, Gone, Gone," the first track I recorded with the band that just happens to share the title of the song Alison Krauss and Robert Plant so generously closed last night's show with.

On a final note, I will be singing with Crystal Ponzio at 7pm on Friday, the 20th of June, at Rockwood Music Hall, and then again at the Living Room in August. Come say hi.

"After silence, that which comes nearest to expressing the inexpressible is music."
-Aldous Huxley
Posted by Alexis Stember at 8:55 AM

Generic Viagra (sildenafil citrate; brand names include: Aphrodil / Edegra / Erasmo / Penegra / Revatio / Supra / Zwagra) is an effective treatment for erectile dysfunction regardless of the cause or duration of the problem or the age of the patient.
Sildenafil Citrate is the active ingredient used to treat erectile dysfunction (impotence) in men. It can help men who have erectile dysfunction get and sustain an erection when they are sexually excited.
Generic Viagra is manufactured in accordance with World Health Organization standards and guidelines (WHO-GMP). Also you can find on our sites.
Generic Viagra is made with thorough reverse engineering for the sildenafil citrate molecule - a totally different process of making sildenafil and its reaction. That is why it takes effect in 15 minutes compared to other drugs which take 30-40 minutes to take effect.
[b][/b]
Even in the most sexually liberated and self-satisfied of nations, many people still yearn to burn more, to feel ready for bedding no matter what the clock says and to desire their partner of 23 years as much as they did when their love was brand new.
The market is saturated with books on how to revive a flagging libido or spice up monotonous sex, and sex therapists say “lack of desire” is one of the most common complaints they hear from patients, particularly women.