Raymond Carver, SoCal and Me 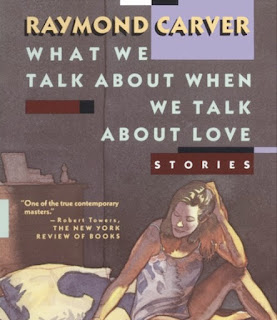 I miss writing. It's what I did once, at school, while studying creative non-fiction in a program called 'Writing and Democracy.' I wrote for hours a day, working to make my voice one of personal and political change. Writing was a habit and when I put my proverbial pen to paper, struggle rarely ever ensued. Those days are gone now, or perhaps they're just vacationing on the sunny shores of Southern California, like I am. If they are, it's a shame we haven't managed to bump into each other yet.

It's beautiful here in SoCal. I used to live here and always enjoy returning for visits, though I always enjoy going home again, too, home being a relative and loosely applied term in my life these days. I am moving yet again, though not back into my own apartment, as I have sublet that until early March, but rather into a temporary room in Park Slope, Brooklyn.

Park Slope is charming from what I've gathered from the five times that I've been there. I went once for a dinner party involving much wine and cheese with an ex-boyfriend some three plus years ago, then once again for a brunch that involved baby strollers, more cheese and the same said ex-boyfriend. I went once to see Eugene Mirman perform at Union Hall, for which I arrived two minutes too late and missed the show entirely. I went twice and most recently to visit a friend who moved into a lovely apartment on 2nd Street between 5th and 6th Avenue after going through two other apartments in two months, a track record not entirely unlike my own.

Though I've had an address in the Lower East Side for a year now, I've only actually spent roughly four months in physical residence there. I officially moved in last November, spent February and March traveling and/or sleeping on a fellow Lower East Sider's couch, then moved back into my apartment, had my boyfriend join me, then joined him in his apartment and rented mine out for the months of September, October, November, December, January, February and March, and now I, no longer in a relationship, am moving into a sweet but extraordinarily small room that, apart from me, accommodates no more than a twin bed, a comforter and my thoughts.

Nomadism seems to be the real, long-standing, unintentional and unavoidable relationship in my life, and like the wife who glibly complains after years that she's lost all interest in her husband, I confess that I have done my fair share of bitching and moaning, though at heart, I know there is still a deep, familiar love there.

As much as it takes, nomadism gives back a lot, too. It presents me with the opportunity to discover what, for me, is always fresh and new: a new neighborhood, apartment, coffee shop, bus stop, person, place or thing. In discovering what is new around me, I often discover perspective, a new way of seeing and understanding things that helps me better understand myself.

In the meantime, it helps to know that I have loved and been loved and that, though it's meant the end of yet another home and another relationship, I have done my best to fulfill the lofty goal of living honestly, even when the truth, as it so often does, hurt. Raymond Carver, I think, would understand.
Posted by Alexis Stember at 12:07 AM

Curious how so many people's imaginations Carver touched, with a mere three books and short career.

I am writing a interpretative biography of him right now, and re-learning much of his life and habits.

His impact is certainly remarkable. I'm curious to know more about your biography.And Vincent D'onfrio as Carver. I love it.

just got this in the new yorker on-line thing,and i thought about this blog posting and how you dig ray carver