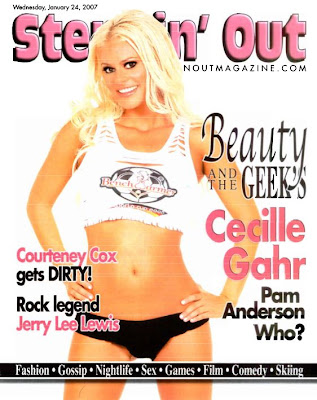 So while out the other night, I noticed a free magazine being offered at the far end of the bar. Attracted at first by the sheer blondness of the cover, I was drawn in further by the inexplicable unattractiveness of the girl who, if you just glanced at her, had all the typical characteristics of a 'hot' girl but who, on further inspection, looked a bit more like a Mr. Potatohead who got her pieces on wrong.

Then I scanned further down the page to read the text in the attention grabbing banner someone in an office probably spent an hour arguing with top brass over. "No, this is great, see? It's bite-sized! It's summarized! It says everything we are and ever will be! Fashion, Gossip, Nightlife, Sex, Games, Film, Comedy, and-"
Skiing?
Really?

In other news, congratulations to Ms. Nicole Dean, who named and helped develop the sexy Estella bag in the Fall '07 Elliott Luca Collection, which was just featured on the cover of WWD. Yea, Nicole!

ps- i'm not much of an absentee blogger, am i.
no, that wasn't a question.