When My Left Hand Hurts, My Right Hand Feels 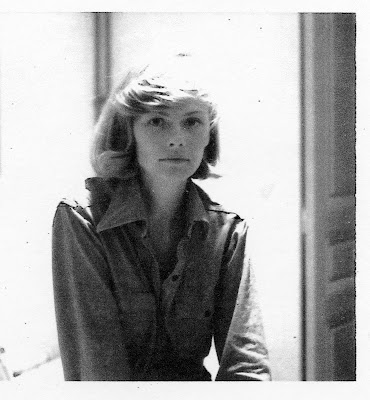 I wrote this piece a couple years ago and it came to mind recently for a few reasons that are less interesting than the story itself so I thought I'd post this rather personal piece. It is very much dedicated to my mother (pictured), my grandmother and the generations of relatives I've never known.

When My Left Hand Hurts, My Right Hand Feels
(the original- and rough, I might add- version of this story was published under the same title in the first edition of 12th Street, Vol. 1 in 2008)
In the photographs I've seen of her, of which there are very few, she looks like a happy person. Her eyes, soft but open, glimmer and her smile curls slightly at its edge like a piece of paper poised to burst into flames.
I picture that day in 1967 as cold, dark, and snowy, like so many other winter days in Sweden. I don't actually know if it was winter when she died, or who found her or how, but I know that she chose pills, the backwoods, and that her mother had ended her life similarly years before. I've often looked at those photographs and wondered about this woman, this grandmother of mine, who like the rest of my ancestors, I’ve never met.
I was six years old when I first remember seeing my mother cry. It was 1987 and we were at home in Iowa. I walked into her room and there she was, sitting in bed, her face wet with tears. She had always been a gentle, soft hearted woman—soft as her mother's eyes—but I had never seen or suspected the source of that softness. To me, she was nothing but strong, the pillar of our single parent household, but standing there I realized for the first time that she, too, knew what it was like to be a child. It caused my chest to throb with a pain that, while familiar, I didn't understand.
My mother, the oldest of three, was nineteen when her mother's body was discovered in the woods with a belly full of barbiturates. Or benzodiazepines. Or some other sleep-inducing form of relief, the specificity of which I'm still not sure. As much as can be possible, I don't think my grandmother’s death came as a surprise. She'd already attempted her life once before when her husband, my grandfather, died of an illness that left her with three young children, a fulltime job and a welfare check that barely kept a one bedroom apartment in working class Sweden in 1963.
My mother and I didn't talk much about family when I was growing up, not out of avoidance but due to the day to day realities of our existance: my father had left when I was one and I was, and still am, an only child. On occasion, she would mention something about her mother, her father, or her life as a young girl and though I heard, I never quite listened. Her stories were like ghosts in an unknown world that I wasn't quite sure I wanted or was ready to inhabit. At this point a teenager, I had my own self-centered pain to contend with.
In 2002, when I was 21, my mother and I went back in Sweden after an extended absence to celebrate her brother's 50th birthday. When we arrived, he welcomed us and put our luggage upstairs where my cousins, young men now, usually slept. My mother and I took our time unpacking and spent the next few leisurely days walking through Mälarhöjden, the suburb in Stockholm where my uncle and his family lived.
We wandered the familiar rocks and waterways, took the Tunnelbana to see her old school, to drink coffee and eat kaffe brod with friends in Gamla stan, and eventually to visit her old home, an apartment on the second story of a two-story brick complex that I had never seen, located on the outskirts of town.
The building was far less sentimental than I'd imagined it would be. It didn't have the romanticized charm of poverty that I'd pictured in my mind's eye. Instead it was cold and utilitarian; a box surrounded by more boxes in an unexpectedly developed neighborhood. I wondered where the backwoods that my grandmother, and great-grandmother before her, had wandered into for her final comfort was. Was that it? That small cluster of trees there? Or that? The bit of brush between between those buildings?
My mother and I came home in the late afternoon, poured a glass of water and sat together on the twin bed upstairs like school girls. Slowly, quietly, we drank. My mother pulled out a photo album that her brother had been keeping, an album I hadn't seen. It was their mother's album. She opened it and pointed to faces I didn't recognize with names I didn't know scrawled beneath.
I saw a man- my grandfather- and recognized my uncle, my aunt and my mother in his face. I saw a woman- my grandmother- staring softly through black and white and saw in her eyes the tears that now filled mine. They were the same tears, I realized, that had filled my mother's eyes when I'd walked in on her as a child and found her crying. Looking again at the picture, I noticed a pain that I recognized as my own, a pain that for years I'd felt helpless to fix or understand, and now, finally, I understood it. I understood what I imagine my grandmother did not.
My mother wrapped her arms around me and we continued to cry. "I had a dream last night," she said. "I had a dream that I was a body, and my mother was my left hand and you were my right and I was in the middle. And when my left hand hurt, my right hand felt it. The whole body felt it."
Posted by Alexis Stember at 3:23 PM

Beautiful and powerful. Thank you so much for sharing. Sending love to you and your mom. :)

Sure, you’ve heard about me, because my fame is running in front of me,
my name is Peter.
Generally I’m a venturesome gambler. all my life I’m carried away by online-casino and poker.
Not long time ago I started my own blog, where I describe my virtual adventures.
Probably, it will be interesting for you to find out how to win not loose.
Please visit my web site. http://allbestcasino.com I’ll be interested on your opinion..

We do not agree with this year BRIT awards decision.

Do you have a burning question we could ask all the stars at The BRIT Awards?

Rather cool blog you've got here. Thank you for it. I like such themes and anything that is connected to this matter. I would like to read more soon.

Rather interesting place you've got here. Thanx for it. I like such themes and everything connected to them. I definitely want to read a bit more soon.

Nice blog as for me. I'd like to read a bit more concerning that topic. The only thing I would like to see on that blog is some pics of some devices.

I definitely want to read a bit more on that site soon. BTW, pretty good design you have here, but what do you think about changing it from time to time?

Rather nice blog you've got here. Thanx for it. I like such topics and anything that is connected to this matter. I would like to read a bit more soon.