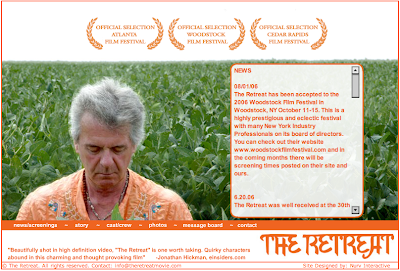 My friends Zachary Sluser and Jonathan Lynch, the talented people behind movies like The Retreat and music videos like Phosphorescent's A Picture Of Our Torn Up Praise are raising the last bit of funds for their new project. If you have a couple of bucks and see fit to support the arts and some very talented young folks, please read on.

We're excited to let you all know that we’re preparing to shoot a new short film out here in LA this April. The film is called Path Lights and is an adaptation of a Tom Drury short story (published in The New Yorker 2006).

We’ve gathered a great team and will be shooting on the new RED HD camera (the closest thing to 35mm in the digital world thus far). The good news is that with this team and some favors we’ll have the same or better production quality as our last short films for just over half the budget. So far we’ve raised $8,000 from family, a few friends, and Jonathan and my own personal contributions. We are now reaching out to approximately 300 friends and associates (including you) to pull together the remaining $4000.

We know that things are tightening up for everyone financially these days, and we only want to humbly ask for whatever is comfortable to contribute. We are suggesting $10-20, the cost of one or two movie tickets. If everyone can do this we will have enough money to pull off the production. You may contribute more or less, these are only suggested amounts (the different categories for contribution are listed on the site).

If you can comfortably be a patron to our film just click on the link below which will take you to our page at fundable.com. There you can enter any debit, credit card, or paypal information (click on the paypal button or the debit/credit card icon). It is totally secure and will take less than 3 minutes. Your contribution will only be processed if we reach our goal of $4000 within 21 days, otherwise it will be credited back to your account.

We would like to thank you for all the support you have shown to our creative endeavors over the years. Your time, generosity, or emotional/financial support has allowed us to follow our dreams and pursue this challenging but rewarding career out here. Thanks again, and we’ll keep you posted on the progress of the film.

SYNOPSIS
Path Lights, based on the short story by Tom Drury (published in the New Yorker in 2006), is a short film about the many forms of mystery, in art, in our imagination, and where the line of dreams and reality blend together. Bobby, our narrator, is the voice of pulpy detective serials on audio, as well as the automated answering service of a tree cutting company. One day, when walking his dogs in the Pasadena arroyo, a bottle falls from the sky, almost hitting him. Bobby decides, based on the obscure brand of beer, to trace down the culprit. As he goes about the self-acknowledged specious mission, he finds himself lost in thought about a current probe on Mars, how his detective alter-ego would go about the beer bottle case, and finds himself in the center of a much weirder tale than he originally imagined. Path Lights is a thought provoking, comedy-noir that puts a human spin on the tradition of detective hero films.
Posted by Alexis Stember at 2:49 PM

Labels: A Picture of our Torn Up Praise, Jonathan Lynch, Phosphorescent, The Retreat, Zachary Sluser