Where the Streets Had No Name, Now the Place To Be 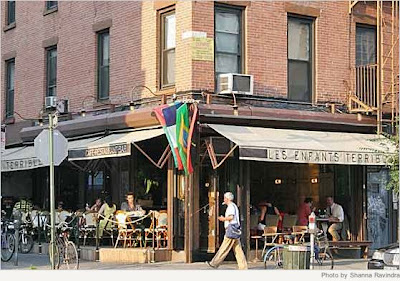 On the edge of a neighborhood that was once farmland; where wealthy merchants built their homes; where Irish men escaped the potato famine; where Germans created Kleindeutschland; where Eastern European Jews sold pickles from pushcarts; and where Chinese letters now cover the red and blue awnings of noodle shops and bakeries, there is yet another sign of change: the small restaurant Les Enfants Terribles, which sits on the corner of Ludlow and Canal Streets on the Lower East Side of New York.

The restaurant, painted in shades of chocolate, latte, and taupe, gives the impression of a romantic past while simultaneously signaling a different future. Families in sweatshirts, workmans' jackets, and sensible shoes wander the pavement outside while people inside wear expensive jeans tucked into high-heeled boots. Long cylindrical lamps hang from the ceiling, casting a warm orange glow on the faces of twenty-somethings who drink Syrah with their tangine.

An elderly man passes the window and momentarily peaks in.

Les Enfants is not new- its doors opened in 2003- but it was one of the first places to indicate a wave of change in a neighborhood once considered no-mans-land. As the area north of Delancey Street rapidly gentrified, the area south of it remained somewhat forgotten, although 2003 also saw the opening of 88 Orchard, a café that sells prosciutto and mozzarella sandwiches across from Guss' Pickles, a neighborhood relic that has supplied the Lower East Side with full and half-sour pickles since 1920.

Seward Park Housing, a group of dwellings built for and by trade unions in the late 1950's, stands a few blocks from Les Enfants Terribles. It, too, has seen changes. "People who originally bought apartments here weren't allowed to sell them for more than they paid," Matt Zimmerman, a man in his early thirties who recently purchased a one-bedroom apartment in the complex, told me over his salmon burger.

"People couldn't make money from it so no one ever sold, but now they're getting older and dying off and people like me are coming in.... I can't wait until it's all like this," he added, glancing over at the spiky haired, crushed velvet wearing hipsters sitting next to him. With a new 60,000-square-foot, 150-room hotel planned for Canal Street at Orchard, and another planned for Grand Street this year, his hope may be nearer reality than he knows.
Posted by Alexis Stember at 2:38 PM

Wow, a French flag in America. I thought France or anything French was now taboo in the States. :)