things across the pond 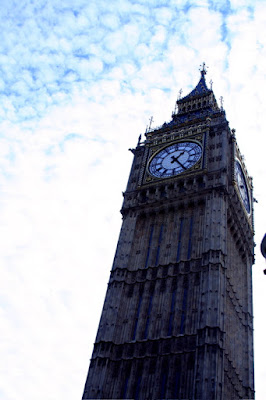 I was listening to a John Humphrys BBC interview with Tony Blair this morning. It reminded me of how pathetic most (but not all) American journalism is. Humphrys spoke unapologetically to Blair as an equal, grilling him on the Iraq war. Despite clear passion on both sides of the debate, neither side spoke over the other, as interviewers and interviewees are so wont to do here in the states. The questions asked were sharp, direct, and without sugar coating, forcing Blair into a position of legitimate defense, a defense he delivered quite effectively. Because the right questions were asked, I heard for the first time an argument for the war that was actually worth considering. I still might not agree with it but at least there was intelligent enough conversation and debate to make me think.
Hmm…. I wonder when that will happen at home?

While on the topic of a British journalist, I thought I would put up those pictures I took from Londontown.
Here's the link for your viewing pleasure: http://flickr.com/photos/alexisstember/sets/72157594550257305/

Posted by Alexis Stember at 7:49 AM