Back in 1994, I was as much of a sucker as any for the dark nail polish rage that swept the nation. My bottle of Chanel Vamp was a treasured pal and I have no problem admitting it.
Here we are now, twelve years later, and the trend has reemerged like a viral plague, attacking every organism with a pulse. I like the dark polish rage, but enough already.
We got it.
That passport to cool has expired and it’s time to reissue.

By the way, don’t look behind the curtain; my nails are only kind of dark right now.
Black Nail Polish: A Brief History
Nails Meet Midnight 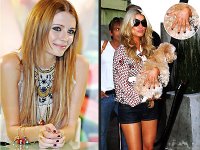 Posted by Alexis Stember at 8:27 AM