A Smattering of Things 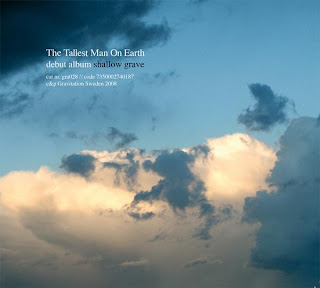 As I earlier blogged, I planned on going to the Living Room to see the Tallest Man on Earth last night. I made good on my word. Perhaps it was the intimate setting or the attentiveness of the audience but for whatever the reason, what I was saw, just singer/songwriter Kristian Matsson and his guitar on stage, felt significant and magical. I hope the Tallest Man gets to keep on electrifying people across the country the way he did me.

For those who do not know who he is, I highly recommend giving him a listen. You can read about him at the following LINK, as well as hear some of his tracks at the bottom of the page.

After the show, Megan and I went for a drink at the Lobby Bar in the Bowery Hotel. After much hype, we wanted to see what the place was all about. I have to say, they've done a very nice job creating the feel of an antique personal library in the space. Apparently, the bar has been criticized for stepping too closely on the heels of Ian Schrager's Gramercy Park Hotel bar, Rose Bar, but seriously, the Lobby Bar is nice, so who cares?

And as for those accusations that the Lobby Bar and Rose Bar are too much alike, I frankly disagree. 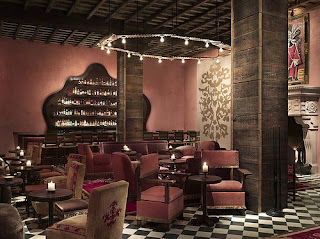 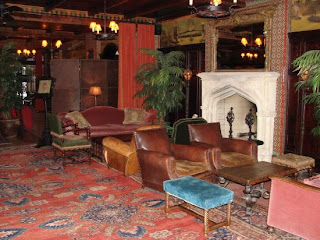 Lobby Bar
The Rose Bar is a deliberately and overtly stylized space that feels modern and contemporary. Its high ceiling and large central light fixture feels like a updated take on Spanish colonial decor while the black and white tiled floors are an homage to classic art deco New York. The Lobby Bar, on the other hand, is warmer and more organic with its spatial nooks and crannies, its Persian rugs and its worn leather armchairs, all of which communicate "room in an old English home" rather than "room in a famous designer's apartment". 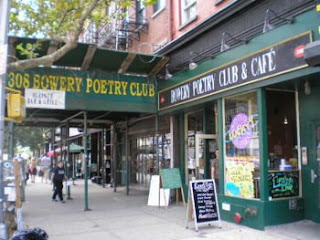 After drinks, I wandered down the street on my way home and bumped into Nick Nace, who I've vaguely known for a little while, outside the Bowery Poetry Club. We chatted (and saw Robert Plant!!!) and I ended up stepping inside for a drink and to watch a bit of the always entertaining O'Debra Twins "Show & Tell" Open Mic. 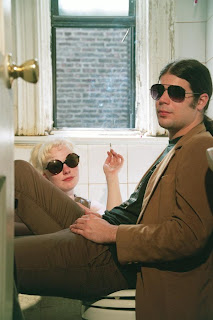 The house band for the show is A Brief View of the Hudson, which is comprised of Nick Nace and Ann Enzminger (I believe there is a third member as well, though I could be wrong). This is probably one of those things you're not supposed to admit but when I've seen this band in the past, it's fair to say that I was distracted, either by conversation or by company, and it wasn't until last night that I think really I heard them for the first time, which is a shame because they were great. Check them out for yourself at the Bowery next Monday. 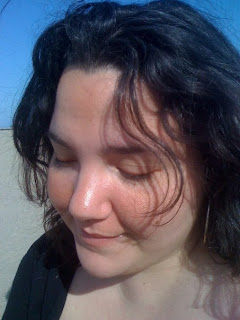 Speaking of the Bowery Poetry Club, gifted poet Rena Mosteirin, who won this year's Kore Press Short Fiction award, used to read there when she still lived in New York (she's in Chicago now). In my blog post from yesterday, I linked her brother Marc's name to a poem of hers that was built out of two years of his emails. Today, I've decided to post the actual poem (below).

I post this poem because I happen to love it. You could say I love it because I know the people it's about, or because it's from the point of view of someone I adore, but I think it goes beyond all that. I think it's just a damn fine piece of work. 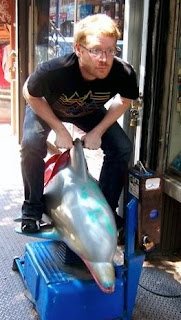 I'm also posting what I find funny but what might not be of interest to anyone else. It is the Sit On My Face (Know the Difference) Mix, which is, in the words of Dr. J, "songs sung or discussed during mah recent trip to NYC, turned into a little half hour micromix." The title is derived from one of the best comments I've ever received on the streets of New York. It happened while walking from the LES with J and Chris to go to the Big Apple BBQ. A group of guys hollered in our direction, "Hey baby! Yo, girl! Sit on his face and sit on mine and you know the difference!" The tracks involved sound a little something like this:
1. Hot Fun In The Summertime - Sly & The Family Stone
2. The Spirit of Radio - Rush
3. 99 Luftballoons - Nina Hagen
4. Changin' My Change - Alex Battles & The Whisky Rebellion
5. Snakes Say Hisss! - Rubber Band Man (rmx)
6. Lil Mama - Lip Gloss
7. Power Station - Some Like It Hot
8. Richard Marx - Right Here Waiting
And with that, I leave you.
Stay hot out there, NY.

Last night I got ass-high out in the front with Rummy
and then watched Wu-Tang Invasion on the laptop.
I was standing under the tree and the cat got onto
the branch right over my head and started attacking.
That's the most enjoyment I’ve gotten out of that creature in years.
The flowers on the tree are really nice. An old European
man stopped yesterday to admire them. He didn't
speak any English but managed to explain to me anyhow that
he was impotent and could no longer have sex- mostly
using hand gestures. I'm contemptuously pessimistic regarding Lauren
and females in general. Must go for my daily walk now.
I somewhat enjoy those, at least it's gorgeous out.
I feel like the entire house is a cathode ray worship temple.
at any given time, at least one bright
blue inferno is slow-roasting the family soul.
At least you don't scream for buttermilk every day like G-man.
When I was a freshman in college I used to go to the dining hall and fill
up a glass 25% with Hershey's goo and the rest with milk. Suck it down
like there was no tomorrow. I don't know why I bothered
adding the milk. Ray got rejected from the American Express job
he's been trying to get for months so it's back to weed for him.
The cityscape is not exciting me as much as it used to lately. I think
my ocean of appreciation has been polluted
by the feeling that it's not ok to be economically idle anymore.
Saw the dentist today - old guy with a white fro.
Asked if I played soccer - i said no.
Said my teeth looked smashed-in. i said oh.
All this after talking to me about god and children and mouth biology
for one straight hour (there were polish ladies in the waiting room,
loudly turning magazine pages). He wanted to drill
my teeth down cause they're jagged. I refused
the procedure on the grounds that I get enough natural grinding.
I go to Benninger park and do pull-ups on the playground structure.
the little kids crowd around and say "Whoa, do you
take steroids?" and then they all boast generously and try
to pull themselves up. It felt nice to be in a crowd
of little kids today. They wanted to see my
arm muscles. There was the little kid area and an old man area –
dozen or so non-English speakers crowded around 2 or three
tables playing dominos and shit.
Maybe I’ll crash their party too sometime.
Posted by Alexis Stember at 10:20 AM